Éram is a company that sells shoes and accessories for Men, Women and Children. With 375 points of sale in France and around the world, the company also sells its products through an online store.

Twice a year, customers can benefit from a variety of discounts on a large range of products. These special sales periods are called “Les folies d’Éram”.

Éram partnered with Numberly to help set up a solution measuring the impact of each touchpoint within the scope of an omnichannel communication strategy.
The data expertise of Numberly was needed in order to better understand the interactions between different channels, their relevance and their real contribution to the success of the operation.

Numberly set up a series of test protocols to enable a more precise measurement and to gain a greater understanding of the effectiveness of each channel within the omnichannel plan.

The purpose of these protocols was to create similar samples for different omnichannel activations. To determine the incremental value of an additional channel, Numberly measures the change in performance between the control group and the test group.

These experiments enable the accurate measurement of incremental turnover, i.e. the turnover genuinely created by the activation of an additional channel.

In addition to emailing campaigns, it was possilble to measure the effects of activating two alternate channels: SMS and programmatic display. 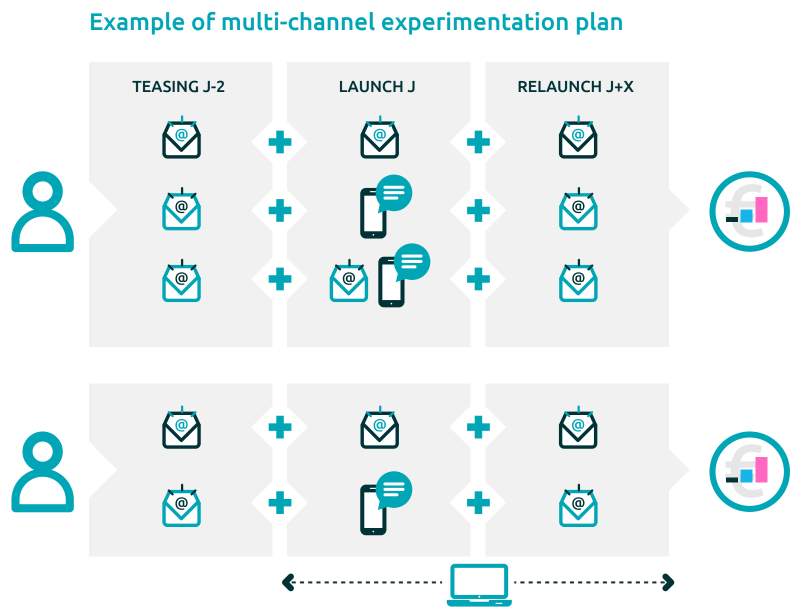 On each scenario, the additional channel generated an incremental number of conversions, both online and offline. This study helped Numberly understand the origin of these additional conversions and highlighted the role of omnichannel activatio.

To each audience their channel

The incremental impact of SMS is improved when focused on individuals who are not reactive to emails anymore (42% of incremental conversions).

On the other hand, this channel doesn’t generate an incremental impact on the conversion rate of individuals who are already reactive and engaged in the emailing channel.

These results highlight that channels are complementary and show the importance of using several points of contact to reestablish interaction with numerous customers.

The role of the device

The study also facilitated the understanding of the interactions between the emailing campaign and the programmatic display campaign during the operation period.

Thanks to data onboarding, the programmatic activation of the target enabled Numberly to multiply the reach of the campaign by 2.6 times.
The other main interest of programmatic is its ability to expose a customer who has already opened an email of the campaign. Of these customers, which were already particularly engaged with the brand, there was an incremental conversion rate of 14%.

They bring a new perspective that can be used to help determine an optimal channel combination during sales. It enables more decisions in targeting and allows for the prioritization of investments which generate an increased ROI.

of incremental conversions on people who are not reactive to emails, through a SMS sending Display

times higher reach thanks to Display 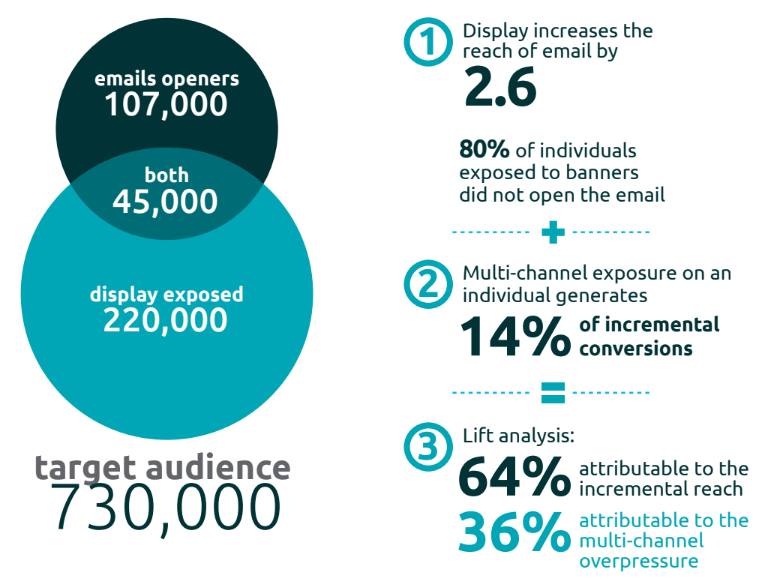 This approach enables to identify the optimal mix of channels to activate throughout our promotional highlights and confirms the benefit of a strategy which multiplies the contact points.