A customized programmatic solution for Lacoste

Combining the use of data-onboarding, programmatic, Amazon and Facebook campaigns to increase sales on 3 markets

Lacoste is a French fashion brand founded in 1933 by tennis player René Lacoste. It sells shoes, clothing, fragrances and eyewear. Lacoste sells its products in more than 3,000 points of sales across 110 different countries, and through its website.

Lacoste wishes to generate more sales during the peak period of summer on three of their main markets: France, Germany and the United Kingdom. 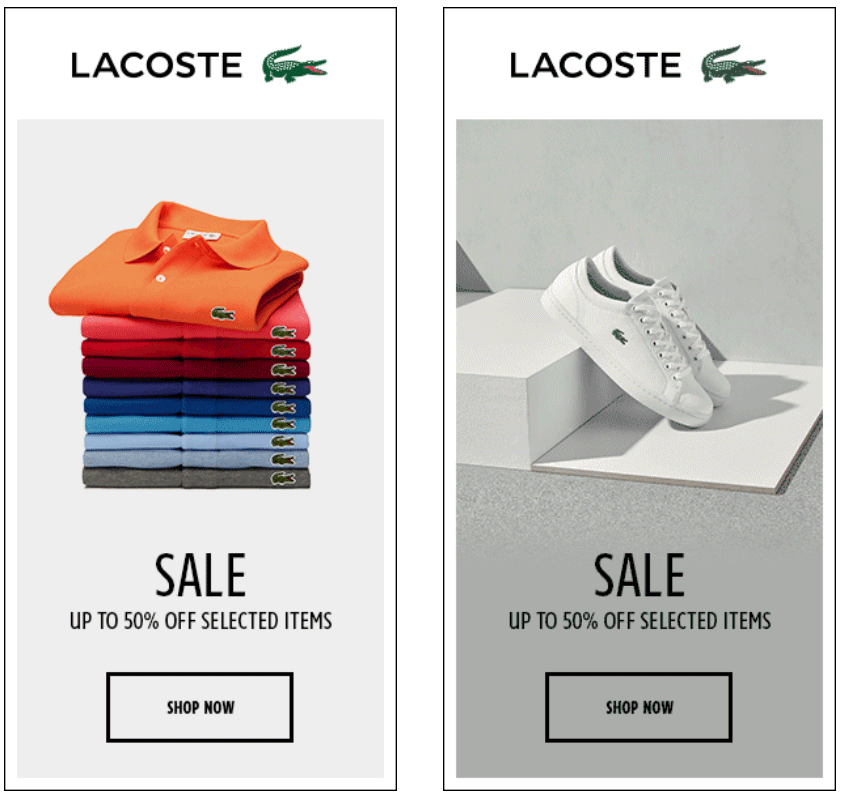 The creatives included multiple ad formats that were broadcast on different devices. Numberly ran tests to determine which creatives were the most effective and implemented optimizations that increased the focus on high potential strategies.

After an analysis of Lacoste’s audience, Numberly segmented their customers according to their behavior.
This analysis led Numberly to divide the audience into three segments :

A huge advantage of retargeting was the ability to adjust strategies depending on the characteristics of each unique visitor.

Teams within Numberly and Lacoste also knew that prospects were a vital segment to target. To acquire new customers, Numberly used several strategies to improve reach. These included whitelists, contextual targeting, data segments and specific deals. All of these strategies were continually monitored and optimized in order to maximize KPIs.

During the campaign, Numberly focused on A/B testing creatives, formats and devices with the aim of achieving the best performance possible for each customer.
At the same time, tests on the different programmatic channels such as Programmatic Display, Amazon and Facebook were conducted to adapt the budget spent on each channel in real time.

Data onboarding allowed to match an average of 60% of matched cookies.

Active customers were the best performing audience with the leading number of conversions followed by prospects and then inactive customers.

On Amazon, the cumulative CPA decreased by 490% over the length of the campaign.

Data-Onboarding combined with a multichannel, multi-device strategy allowed us to fulfil our ambition during a strategic period.